Do people get grumpy in old age ?

Let's define what the Mental Age Test (MMA) considers to be grumpy. The definition as provided by the Cambridge Dictionary is 'easily annoyed and complaining'. An example of the use of the word might be : 'He always gets grumpy when the waiter takes too long to bring the bill.'. Grumpy could therefore be simply about getting easily upset by something. But here at MMA, we think grumpy is a little more than that. 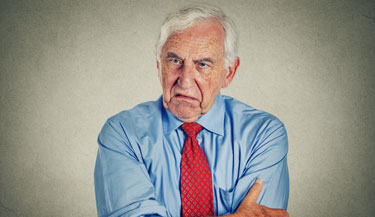 Being grumpy isn't just about being easily annoyed, it's also about being annoyed but not saying anything about it. MMA is based in England and the English are very good at this. In fact, the English are world class at getting really annoyed about something but not saying anything about it at all. Now, while the definition of grumpy is someone who is complaining, the key is what they are complaining about. And that's the point. Grumpy people might end up complaining about something but not the actual thing that's making them grumpy. It's complicated but it's important to understand the difference. Well, sort of important.

So, to be clear. Being grumpy is the ability to be easily annoyed and possibly complaining but about something completely different to that which made the person grumpy in the first place.

What is old age ?

MMA aren't going to go into too much detail here because it will be discussed on another article. Save to say that old age for the purposes of this discussion is anything in the region of parents of teenagers to grandparents. That's pretty vague we know but it's essentially defined by the age at which someone else might think you old. Clearly, everyone is old to someone else but most seven year olds don't consider a teenager 'old'. They do consider however the parents of that teenager to be 'old' and therefore MMA will use this as the definition.

There's a saying that when people exhibit high levels of patience, they have the 'patience of Job'. For those not up on the scriptures, Job had a pretty rough time of things. This was a man who lost pretty much everything he owned, including his children, in a single day. He then managed to get covered in painful sores. Most people would be annoyed at this but he kept his cool. This could be the first record of someone who was definately not grumpy. How old was he ? Well this is where it gets a little confusing.

We have to be honest here. MMA aren't really up on these things but after some checking around it seems that Job lived to around 280. At the time all the bad stuff happened to him, he was probably around 140. To save you the time of searching the internet, there does seem to be some confusion on this and it's possible that the bad stuff started to happen to him around 70. In any event, he was old by any standards and certainly by MMA's definition.

Now, in the end, things came good for Job so it's possible that while he is mentioned as being anti-grumpy, the writers at the time may have forgotten the grumpy patch and just remembered him as a happy person. But, the evidence (MMA use that word a little carefully) is that here was a man who was both old and most definately not grumpy.

Therefore, the biblical case is quite clearly that you don't get grumpy as you get old.

Here, MMA shall turn to a temple of scientific knowledge - the New Scientist magazine. In the words of David Abbott of the Wisconsin Regional Primate Research Center in Madison, "When a bloke gets grumpy and irritable, [researchers] try and explain it only in terms of cortisol levels and depression. They ignore the fact that testosterone levels are probably falling too."

In short, as your testosterone levels fall, men may exhibit signs of grumpiness. So how much do they fall ? Well, scientists have produced research that suggests that testosterone falls at a rate of between 1-2% per year. This would appear to start happening around the age of 30. Yes, that's quite young isn't it. Which means that by the age of 50, a typical male's testoterone levels are significantly lower than someone in their 20's.

MMA appreciates that the scientific case for grumpiness in old age is only being considered here from a male point of view. However, we would urge the reader to understand that this website is a bit of fun. This isn't supposed to be an academic paper and we aren't intending to submit this text to New Scientist. All of which is probably fairly obvious by now.

However, according to Wikipedia, there are more men on the planet than women. Therefore, statistically, even if MMA doesn't look at old age grumpiness from a female perspective, a scientific case for grumpiness in old age can still be made. Thin, yes. But thin's part of the very fabric of MMA.

This isn't easy. MMA decided to turn to popular culture to get the measure of grumpiness and age. A number of top TV shows were considered and assessed for a. who was the grumpiest person in the show and b. how old was that person. The case here is quite clear. Moe Szyslak from the Simpsons was definately grumpy and aged around 60, which is older than the average Simpsons character. Al Bundy from Married with Children. A classic grumpy character although age is a little vague. Described as a middle aged shoe salesman, we could assume that he is in his 40's. Basil Fawlty from Fawlty Towers is another perfect example of a grumpy character. The age of Basil Fawlty is not clear although his wife Sybil Fawlty was apparently 34 years old. However, Sybil Fawlty was played by Prunella Scales who was actually 43 years old when filming started. This would make Basil Fawlty appear to be around mid forties and as appearance is everything, then MMA are going with that.

So the case for grumpiness in old age as far as social awareness is concerned is clear. There's a link.

The conclusion - do people really get grumpier in old age ?

The conclusion would therefore appear to be clear. Getting old does indeed make you grumpy. In fact, it would appear that this grumpiness is likely to start somewhere in your thirties and gradually increase over time. Fact.